Cameron Mitchell is taking diner food a step above by redefining classic comfort at the new Cap City location in Dublin, OH.

The General Manager of the newest Cap City location in Dublin Frank Hess started with CMR in 1999 as a bus boy, and worked his way up as a host, then a server, then a trainer, and then a supervisor. In 2007 he left to open a Columbus Fish Market in Connecticut, after which he moved all over the place. But eventually asked if he could move back for opening of the Dublin Cap City. Throughout his story telling, like every other CM restaurants we have visited, you can’t help but notice how much the employees love their jobs. Frank’s favorite thing about working for CMR is that they take care of their associates. Their motto of saying yes starts with associates, not just with the guests.

The original Cap City opened in Grandview 22 years ago and while it is an upscale diner, it is not fine dining. I say this because when they first started they wanted it to be fine dining but they couldn’t keep up with the traffic! So when they opened the Dublin location they decided to try again. 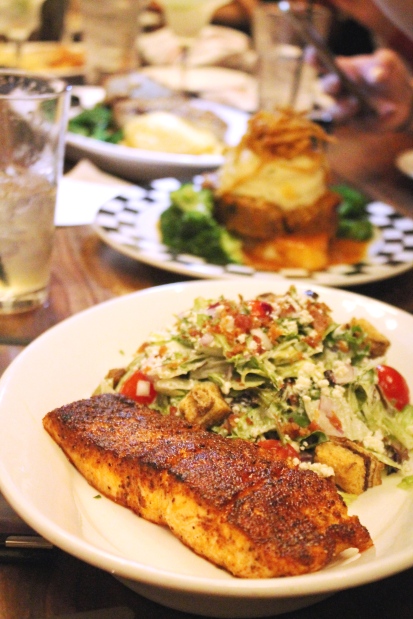 Chef Mike Gilbert is dedicated to food and GM Frank said he’s the finest chef he has ever worked with. Which should come as no surprise being that his background is in fine dining. And yet Chef Mike says he is blown away by the dedication and art of the food at Cap City. Everything is made from scratch (except the ice cream, fries, and bread), even the Alfredo sauce for the chips which is the oldest appetizer on the menu – for good reason.

The chicken wings are tossed in a house BBQ sauce made with tamarind puree, cayenne, and creamy blue cheese dressing. 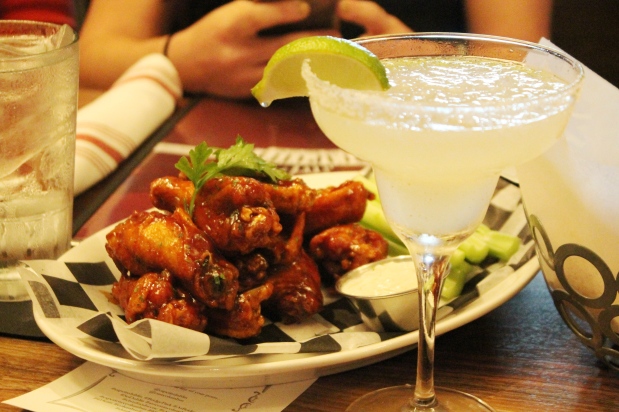 In 6 months they get 16,500 orders of meatloaf total for all locations. One location will use 500-600 pounds of chicken every week, using it to make the Romano crusted chicken which is also used in the sub or the BBQ chicken chopped salad. 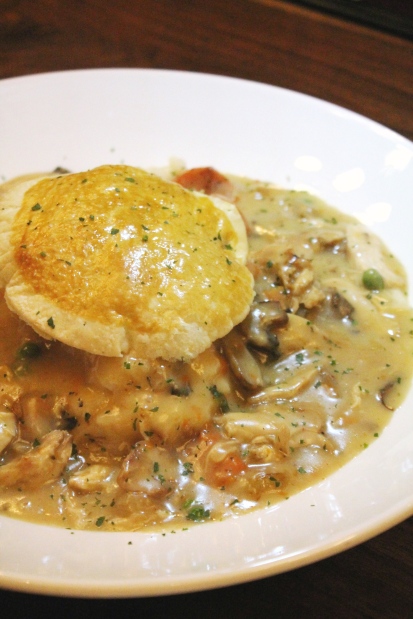 We dined on a Tuesday and the Blue Plate Special was an open faced deconstructed chicken pot pie make with both dark and white meat that is slow roasted and served with a shiitake mushroom gravy. 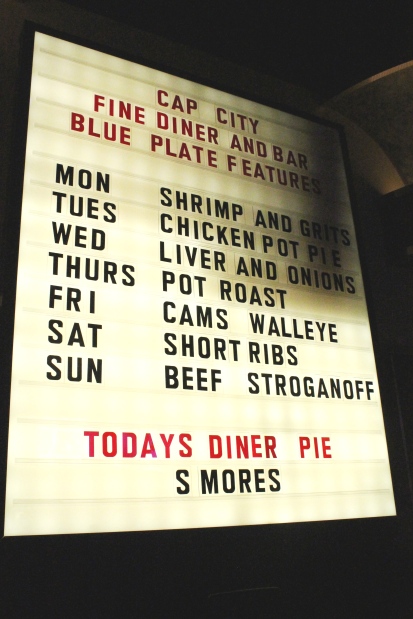 As with Rusty Bucket, Jordan (Midwest Foodfest) loves the gluten free menu. Her brother was diagnosed with Celiac 10 years ago and Cap City was one of the few restaurants around that had an actual gluten free menu back then. They take food allergies seriously, with certain tools used only when preparing food for food allergies.

As with all other CM restaurants, the bartenders use fresh juices made in house. They also have margarita’s on draft which is an upcoming trend in a lot of major cities, with flavors changes with the seasons. They went on to joke about how their elevated whiskey sour should be called grandpa’s coffee because it is bourbon and water. It is made with Old Forester, citrus infused simple syrup, and spices. Next was the Manhattan twist which is strawberry infused. The secret to bringing out the fruit flavor lies in the drop of saline added. 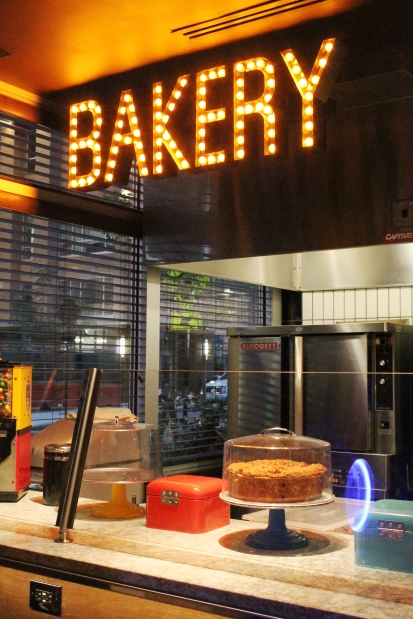 Even all of their desserts are baked in house, including the Seriously big chocolate cake which has been their number one seller for 22 years. This is isn’t just big, it’s very good and yet simple. 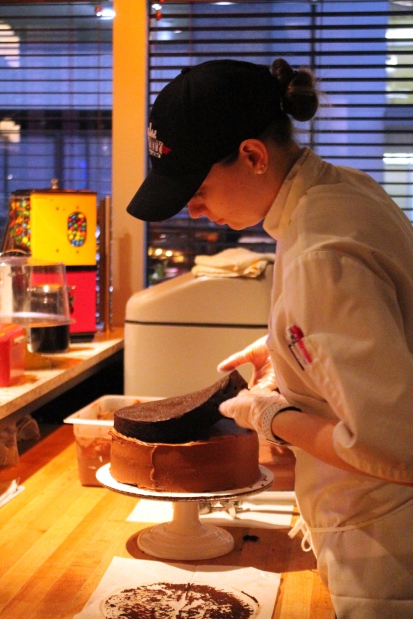 Number two is the carrot cake with 24 carrots in every cake alone with pineapple, white and purple raisins, and white chocolate cream cheese frosting. 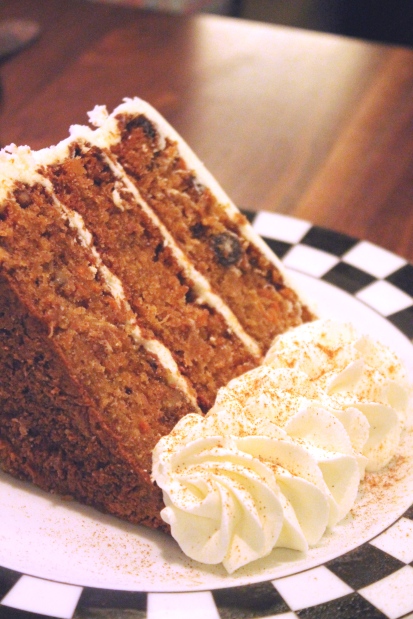 The foot long coconut cream pie started as a gimmick less than a year ago but it already the third most ordered dessert. 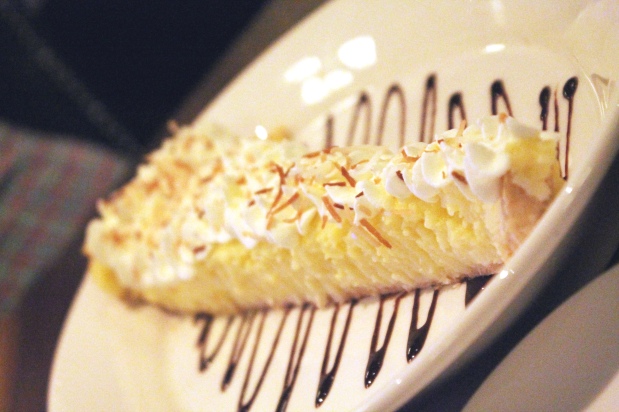 There are also pies, of which the flavors are are the whim of the baker, and milkshakes such as a coconut almond milkshake make with coconut infused rum, and a buckeye milkshake made with a piece of peanut butter pie! 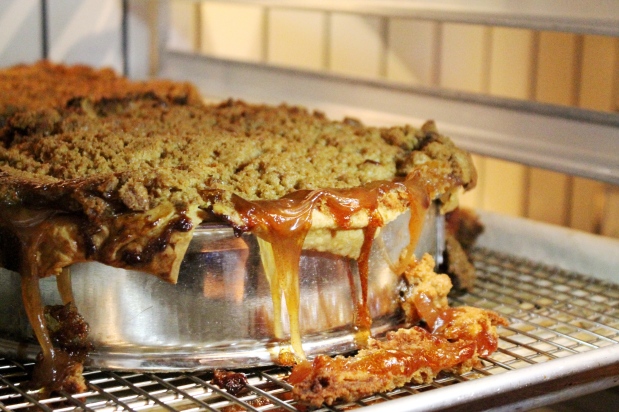 Looking for more specials? Happy Hour runs M-F from 4-6:30pm when apps are $4-6. Mondays you can order a margarita for $6 all day. Tuesdays are burger and beer night where $10 will get you a cheeseburger and any beer draft or cider. Wine enthusiast Wednesday offers all bottles under $99 for half off (which is all of them).