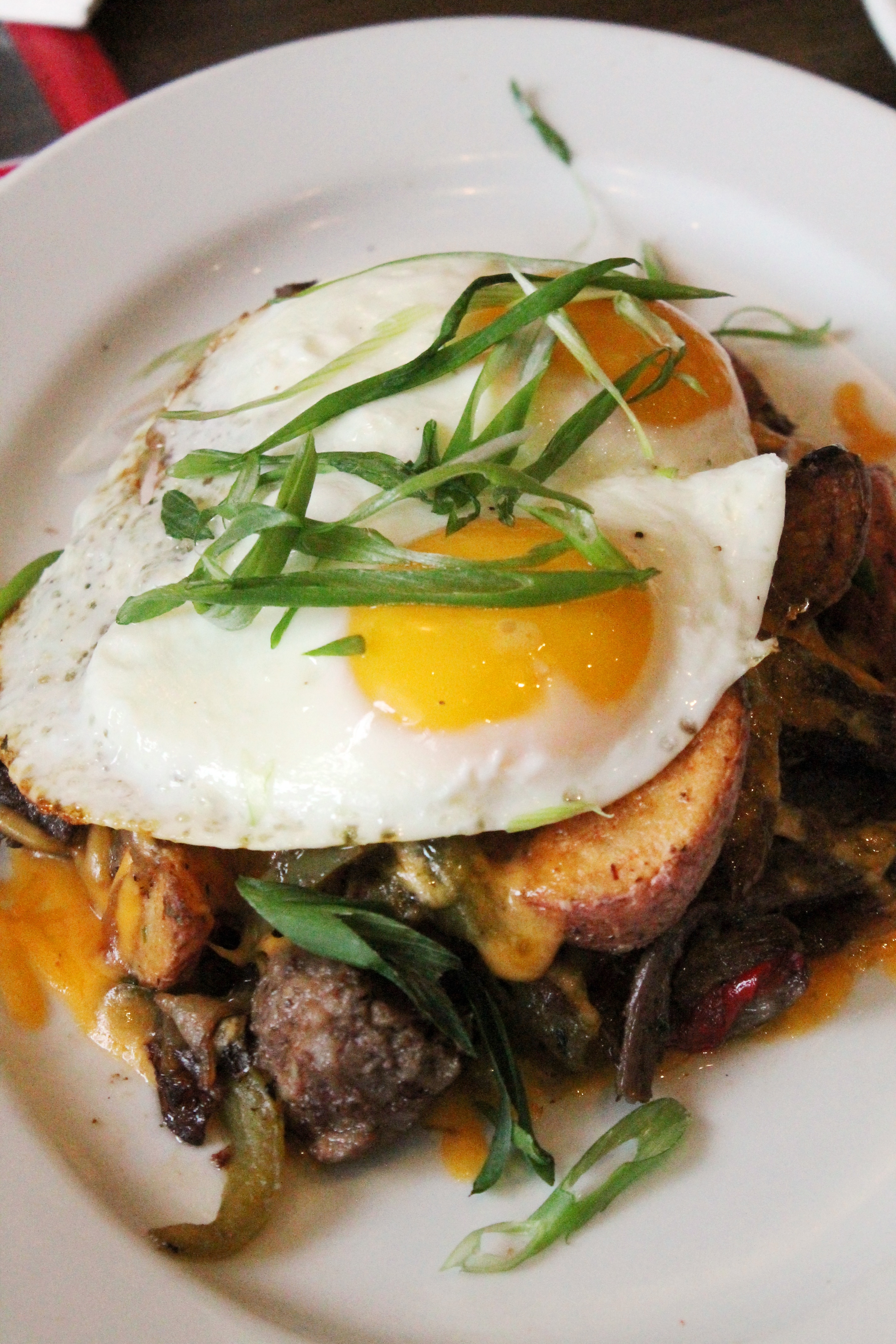 Sure the Short North is the hip place to be from cocktails to brunch, but the Rusty Bucket is not to be overlooked.

If you’re from central Ohio, you’ve probably been to a Rusty Bucket. It’s basically the local, upscale version of your favorite American casual restaurant. After all, didn’t you know that is is the sister company of Cameron Mitchell Restaurants? Now wonder it’s so stinking delicious. The founder, Gary Callicoat, has had a long relationship with Cameron Mitchell and with his help was able to turn his dream of a neighborhood place for people to gather into reality. Since Gary first opened the Dublin location in 2002, there are now 23 restaurants with 15 in Ohio (10 in Columbus, of which Clintonville is the newest), and the remaining 8 spread across in Indiana, Michigan, North Carolina and Miami, Florida as the newest edition. With their high percentage of repeat customers, I think Gary succeeded. And now they offer brunch! 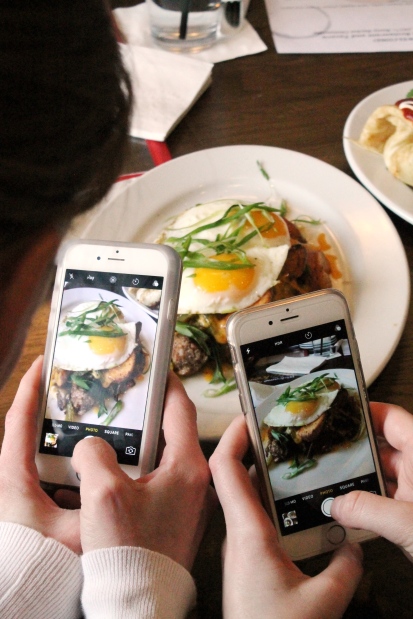 At our visit to the Clintonville location we first met the general manager, Will Brakel, who after only 2 years with the Rusty Bucket compares the commitment to their employees to none in his 17 years in the restaurant business. He clearly believes in his team, saying their passion makes a world of a difference and is expressed in their ninety percent from scratch kitchen. Additionally, ninety percent of the managers and chefs are promoted within, which clearly shows that their employees love where they work.

Rachel, who was the opening bartender for Clintonville, came from a big, corporate, national company and felt a little dispensable. However, Rusty makes her feel valuable. With their open door policy, she feels comfortable going to her bosses about any concerns. “Making you feel important is hard to come by in restaurant industry.”

For brunch, one of the things she makes are pepper Finlandia vodka infusions for Bloody Mary’s with 3 levels of spice: Not Spicy (bell pepper), Spicy (jalapeño lime), and Stupid Spicy (habanero). On Saturday and Sunday alone she makes at least 100, which Will confirmed by saying he watches her make them all day every weekend. In addition to her handmade Bloody mixes, the bar uses only fresh squeezed juices and mixes, which is a testament to their fresh beverage program. Other companies have pre-mixed or pre-bottled ingredients. On a casual dining tier, no one else is does what they do at the Rusty Bucket.

Rachel went on to explain that to work at the Rusty Bucket she had to undergo beverage training for a week, where she learned more in that week than the 3 years of bartending she already had under her belt. She ensures that the citrus is fresh and presentable, is meticulous about to cut the fruit, makes sure it’s visually appealing as well as delicious, makes several kinds of infusions, and has had extensive training on the history of spirits, beer, and wine. Fun fact about the Columbus locations is that the Rusty Bucket pilsner, made by Four String, is only available in Columbus. They also get a special blend of bourbon from Woodford and are almost out of blend Number Ten. With each batch they receive they make a new unique cocktail. 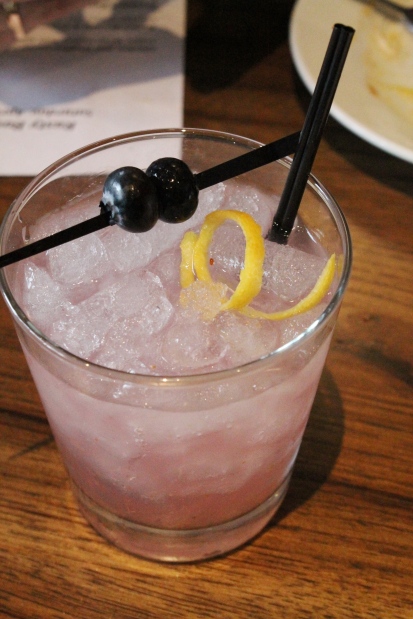 As an example of promoting from within, the sous chef Krissi has been with company since she was 16, starting as dish washer and working her way up. She exclaimed over all of the cool experiences she has had with the company and that they truly care about who you are as a person as if you are family. Will applauded her for her technical skills, repertoire of recipes, and her ability to oversee multiple cooks. And to cap it off, she’s only 22! Will couldn’t ask for a better, calling her “phenomenal”.

After snacking on the Warm Cinnamon Sugar Donut Holes with caramel sauce, Krissi presented us with the Yogurt Spill – plain, tart Greek yogurt contrasted with fresh fruit, crispy granola, sweet honey, and a mint garnish. They offer a kids option as well in half the size.

Next came the Triple Decker Breakfast Sandwich which make look simple but was anything but with 3 cheeses (American, cheddar, Swiss), fried egg, bacon, tomato, scallion and roasted garlic aioli on Texas toast. It was also served with fresh fruit which was a welcomed substitute for breakfast potatoes if you’re trying to stay on the lighter side of brunch.

But if light brunches are not your thing, next came the Bucket Biscuits & Gravy which consists of biscuits topped with sausage patties, house made sausage gravy like your grandmother would make, two eggs sunny side up and scallions. Imagine if eggs benedict and biscuits and gravy got together and had offspring. Delicious, offspring.

In case that wasn’t decadent enough, we also had the Chicken & Waffles which are hand beer battered with house made Belgian waffles with warm maple syrup and powdered sugar. Krissi said they had to double their chicken finger production just because of the introduction of chicken and waffles to their menu. I can’t say that we were surprised by this fact after trying it ourselves.

Another fan favorite (who am I kidding we were obsessed with everything) was the Breakfast Burrito. A flour tortilla stuffed with scrambled eggs, sausage, sautéed peppers & onions, pepper jack & cheddar cheese, topped with ranchero sauce, sour cream and cilantro, and served with red skin breakfast potatoes. Now that’s a hearty meal!

They also offer a different omelet every week, and this particular week was braised short rib with Swiss cheese and grilled onion. This is a favorite item for the chefs and it’s their chance to have some fun, putting whatever they want into it. 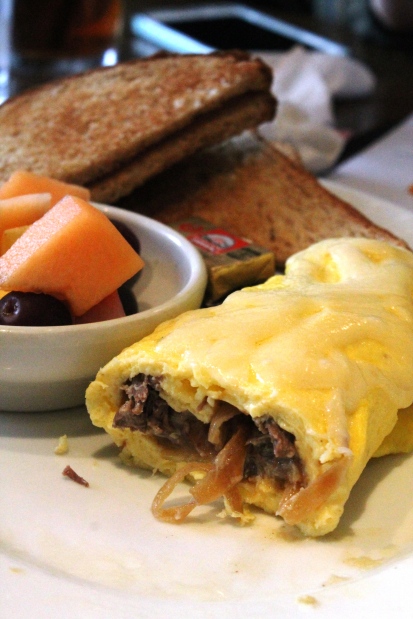 Other than the omelet, the menu in general changes pretty frequently. Some items used to be specials but are now staples, and vice versa. The menu is constantly evolving as they listen to customer feedback and requests. People occasionally order off menu as some of the cooks still know how to make them. These are called the hidden gems, because even the computer still recognizes things taken off the menu years ago. Examples include nachos and cony dogs. You can also order regular menu during brunch. When we asked if you can order brunch during dinner, Krissi said they will try their best to satisfy requests – she has made an omelet at dinner service before.

Nikki (Sweetly Cbus) loves that they are family friendly as opposed to many of the options in the Short North. Rusty Bucket as a “Kids Live Well” menu offering healthier options such as grilled instead of fried chicken and fish, and fresh veggie options. They are also take allergies very seriously, reducing any potential for cross contamination. Jordan’s (Midwest Foodfest) brother has celiac and they grew up going to the Dublin location all the time. 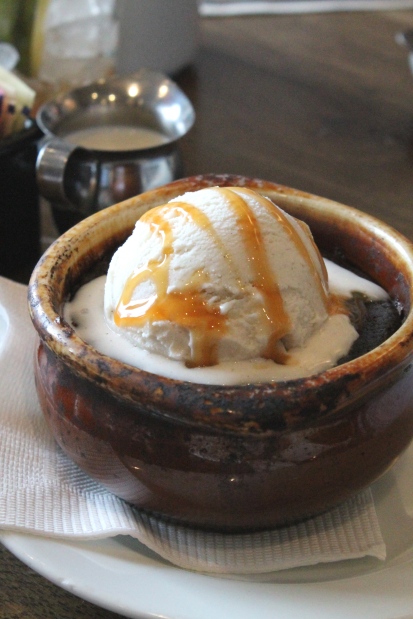 If you still have room they also have incredible desserts. Their Triple Chocolate Cake is so popular, they have to have at least 14 on hand even on slow days like a Monday or Tuesday. These homemade chocolate cakes are topped with Edy’s vanilla bean ice cream and caramel sauce. They also have a Sticky Bun Bread Pudding which is the only dessert that can be guaranteed to be 100% nut free. It consists of a baked custard and cinnamon bread topped with caramel and (optional) candied pecans. Of course it too is served with Edy’s vanilla bean ice cream and whipped cream.

You can also get a root beer float made with Rouge’s draft root beer (or you can just order a frosty mug of root beer like Erin (The Spiffy Cookie) our resident root beer aolic). And they have a seasonal dessert coming out soon – strawberry shortcake!

In case you weren’t impressed enough, Rusty Bucket also hosts a Dine ‘n Donate Day, where 15% of sales from the day goes towards local charities. Once you let all of that information sink in, what they are doing at Rusty Bucket is truly amazing. They’ve created an atmosphere of a local hang out with high caliber food, beverages, staff, and overall experience. Whether you’re a regular or going there for the first time, you are guaranteed to leave satisfied and marking your calendars to come back for more! And to help facilitate that we are giving away not one, but two $25 Rusty Bucket gift cards! Head on our to our post on Instagram to enter.

One thought on “#cbusfoodbloggers: Brunch at Rusty Bucket”